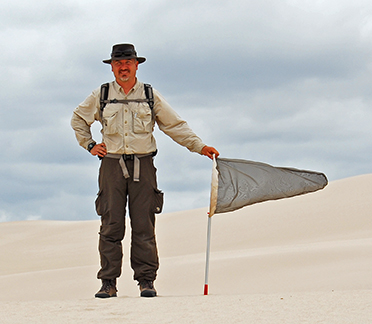 Enjoying a rather stiff breeze while on a collecting trip in Australia. This was taken in Fitzgerald River National Park, WA.

I am currently enjoying my appointment as the Academic Curator of the Wisconsin Insect Research Collection (WIRC).

My interests broadly lie with the taxonomy and systematics of insects. My coursework has included classes on the taxonomy of immature and adult insects as well as advanced taxonomy courses with emphases on Coleoptera, Diptera, Hemiptera (Heteroptera), Hymenoptera (Apocrita), and spiders, respectively.

However, my passion is for the taxonomy and systematics of the vespoid wasp family Mutillidae, commonly called velvet-ants. For my master’s degree, I completed a faunal survey of velvet ants in Wisconsin, resulting in the publication of 24 new state species records, one new sex association, and the description of the previously unknown female of one species.

My dissertation comprises a holistic taxonomic revision and phylogenetic analysis of the the South American genus Tallium André. I followed a traditional morphological approach to elucidate sex associations, intraspecific variation, and interspecific relationships among members of the genus. Tallium species have been collected from northern Argentina north to Venezuela and Columbia.

I am presently focused on the mutillid fauna of Australia—a 2010 exploratory collecting trip to Western Australia yielded over 600 mutillid specimens and a wealth of research questions, which will serve as a springboard for future research projects. I am also working through a large loan of material from Borneo and familiarizing myself with the fauna of this southeast Asian island as I identify these specimens.

I led two, three-hour laboratory sections per week; my responsibilities included presentation of approximately 1-2 hours of new material per lab, followed by one-on-one interaction with students for the remainder of the period. This introductory course is geared towards students majoring in entomology or other science fields. I was also a substitute lecturer for this course on various occasions during both semesters.

I led one three-hour laboratory section per week; my responsibilities included presentation of approximately 1-2 hours of new material per lab, followed by one-on-one interaction with students for the remainder of the period. This introductory course is geared towards students majoring in entomology or other science fields. I was also a substitute lecturer for this course, in Spring, 2001 and Spring, 2003; I presented new material to 50-60 students during these two 50 minute lectures.

In this upper-level zoology course, I am responsible for teaching up to 16 students per semester in each of two labs to recognize 230+ birds found in southeastern Wisconsin by sight, and to recognize 130+ by call or song. This course is field-based, with all but three of the weekly labs held off-campus at local birding sites around Madison.

Biology 151-152 is a two semester introductory sequence for majors in the biological sciences. Biology 152 addresses plant anatomy and physiology, mammalian anatomy and physiology and ecology. In this sequence emphasis is placed on learning, understanding and being able to use key biological concepts and the scientific method. I led two 20-student laboratory sections.

Each semester, I oversaw up to 32 students in each of two sections during laboratory dissection of primarily cats (Felis) and sharks (Squalus) in this upper-level course. As lead teaching assistant, my additional responsibilities included the recruitment and supervision of up to 12 undergraduate teaching assistants and the ordering of all cadavers and supplies for all four sections of the course. In 2003, I was twice a substitute lecturer in the course as well, responsible for presenting over two hours of new material to 100+ students.

This course examines basic vertebrate anatomical systems with a consideration of variations, using functional, embryological, and evolutionary approaches. I was responsible for lecturing to 128 upper-level students during bi-weekly 75 minute lectures during the semester.